he Victorian Cuboree is held every three years at Gilwell Park during the September School holidays. Gilwell Park is a campsite and activity centre for Scouting groups in Victoria, Australia. The 100 hectare property is located on both sides of the Launching Place Road, Gembrook. Here you will participate in games and activities, eat delicious camp meals, watch entertaining night-time shows and experience the great outdoors.

What is the Victorian Cuboree? It is the Cub Scout equivalent of the Scouts’ Australian Jamboree.

Be sure to check out the Cuboree photos on our Cubs Photo Gallery page!

Approximately 3,500 Cub Scouts from across Victoria will attend the 9th Cuboree, 2017. On top of this, there will be over 1,000 leaders and support staff on site, to look after the Cubs. It was a 4 night camp for all Victorian Cub Scouts aged 9 and above.

To be eligible to attend this great event, you must be:

The Countdown is on for the upcoming 9th Annual Victorian Cuboree on October 2nd-6th, 2017 at Gillwell Park (near Gembrook):

For more information on the Cuborees, use the following links:

GR8 Expeditions and had 3 000+ cubs, 200+ Venturers and 1,200+ adults. It was a 5 day camp containing 6 main activities and 2 spare time activities. The main 6 were Never Never Land, Far Far Away, Time Lords, To Scouts and Beyond, Robin da Hood and GR8 Australia. The spare time activities were Cherry Lane (same as previous years) and GR8 senses. They had night activities which were Campfire Night, Disco and they also had the opening and closing ceremony.

Nine of our 12th Caulfield cubs attended the 2014 Cuboree in the September school holidays, joining other cubs from across Victoria for 5 action packed days of fun, Mt Macedon Anzac weekend camp and many other activities.

For more information on the 2014 Cuboree, use the following links:

And some of the Cubs had even more excitement – as they were also eligible to attend the 2016 Jamboree at Cataract Scout Park NSW! Read the Jamboree news on the scout page to see what Scouts get up to!

“The Adventure Continues” as Cub Scouts were able to get lost in the giant maze and be entertained by the various stunts at Entermazement, headed on over to the Buccaneers Academy to learn how to be a pirate, visited Tombstone town at the Wild Wild West, they needed to grab their binoculars to go on Safari Oz and of course no Cuboree could run with out the carnival fun of Cherry Lane. Each night there was also an exciting new stage show.

In attendance were 2,103 Cubs, and around 900 Leaders, Parents, Rovers and Venturers.

Note: The decision to hold the 2011 Cuboree so soon after the 2010 Cuboree was based on agreement that September was the best time for a Cuboree, and that it should not come too close to a Scout Jamboree. There were several choices in how the date could be adjusted…

The decision to hold the 2011 Cuboree means that all cubs were able to go to a Cuboree, with some lucky enough to attend two.

One sunny day we were riding on a bus,
Going to cuboree with all the other cubs.
Akela came aboard, and began to say
Ready everybody, let get on our way!
We’re off to Cuboree,
And we’re all going to have so much fun
We’re off to cuboree
Going to play, in the mud
We’re off to Cuboree
Gonna make heaps of new friends
It’s Cuboree Seven
Time for the adventure to begin
Survivor, Wild West, & Safari Oz
Entermazement, Bucaneers sound like so much fun
We’ll make some new friends, and have lots to eat
We’re gonna have a ball and maybe get some sleep
Cuboree Seven
So good I hope it never ends
Cuboree Seven
Making loads of brand new friends
Cuboree Seven
Even had a shower and it was hot
Cuboree Seven
The best Cuboree of the whole lot
You can listen to the music here.. just click on the arrow:

The words to the 2010 Cuboree theme song were… 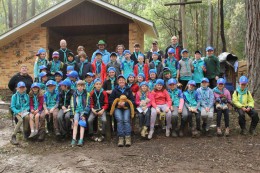 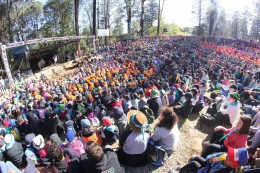